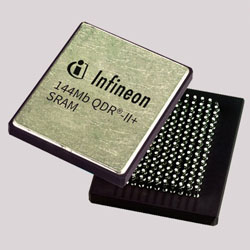 Unlike DRAM, which has higher latency and memory bank limits, the new product allows the processing of satellite images on the system with higher resolution and faster processing speed by providing higher performance, thereby reducing the overall radar and imaging applications System complexity.

"As a leading supplier of high-density QDR-II+ SRAM in the market, our successful QML-V certification once again reflects the inherent product capabilities of our commercial off-the-shelf components to meet the most stringent requirements of the high-reliability market segment," Ying Helmut Puchner, Vice President of Aerospace and Defense, Feiling Technology Co., Ltd. said.

The device is the company's latest generation of radiation-resistant QDR-II+ SRAM. The previous generations of products have been adopted by various space programs, such as NASA's Surface Water and Ocean Topography (SWOT) research satellite missions using synthetic aperture radar technology.

High-performance SRAM runs at a maximum frequency of up to 250MHz, and provides up to 36Gbps throughput in a 165-ball CCGA package. The device has a radiation resistance of up to 200krad (Si), and has an anti-latch-up capability, which can improve system reliability in harsh environments.