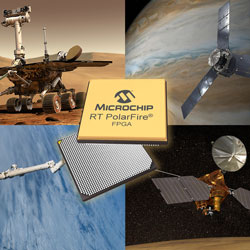 Microchip Technology has delivered engineering silicon for its RT PolarFire FPGA, and the device has passed the certification of aerospace component reliability standards. Now, designers can produce hardware prototypes with the same electrical and mechanical properties as electrical. These electrical and mechanical properties and RT PolarFire FPGAs with space technology qualifications will have high industrial low power consumption and the ability to withstand space radiation effects. The bandwidth provided by the on-orbit processing system is the same.

Bruce Weyer, vice president of Microchip's FPGA business unit, said: "This is an important milestone because we released the RT PolarFire FPGA engineering chip to our customers and started the aerospace certification process through the complete QML Class V standard." "Many of our customers We have begun to use our commercial PolarFire MPF500T FPGA to start the development of satellite system payloads. Now all prototyping can be done through silicon. The form, suitability and function of silicon are the same as the RT PolarFire FPGA that we finally passed on the fly."