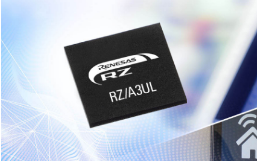 Renesas Electronics, a global supplier of semiconductor solutions,announced the launch of the RZ/A3UL Microprocessor (MPU) product group – enabling high-definition human-machine interface (HMI) and quick-start functions for applications requiring high throughput and real-time capabilities. The new RZ/A3UL allows users to realize the full potential of a real-time operating system (RTOS), while taking advantage of the performance boost provided by the 64-bit Arm® Cortex®-A55 CPU core operating at a maximum frequency of 1GHz. Using an RTOS allows the system to boot instantly in less than a second after booting. This feature is ideal for systems that require fast response, such as industrial equipment, home appliances and office automation equipment with LCD displays or control panels, as well as audio equipment and POS terminals.

RZ/A3UL supports two outstanding RTOSs in the industry: FreeRTOS and Azure RTOS. Renesas is an authorized supplier of the Azure RTOS for the RZ product family, and its users can simply download the high-performance Azure RTOS from GitHub and start using it immediately. In addition, Renesas provides a flexible configuration package containing FreeRTOS and HAL (Hardware Abstraction Layer) drivers for developers to use as a reference when developing their own applications. An extensive set of middleware is also available for both operating systems, further reducing development time and costs.

"Many customers who use RTOS tell us that they want to retain features such as excellent real-time capabilities and fast startup, but also want higher resolution and better Performance. I believe that the RZ/A3UL can not only achieve the higher performance they need, but also bring them the flexibility and ease of use that MCUs provide.”

Moe Tanabian, vice president of Microsoft and general manager of Azure IoT, Light Edge, AI, said: "The combination of high-performance MPUs like the RZ/A3UL with the real-time capabilities of Azure RTOS will directly improve the performance of our customer devices."

The peripheral functions and package pin assignments of the RZ/A3UL are compatible with the RZ/G2UL based on the Cortex-A55 core for Linux HMI based applications, and the RISC-V based RZ/Five products. This means that engineers can develop entirely new products from the same board design by simply changing the chip. Device-to-device compatibility also enables engineers to easily transition from products running RTOS to Linux-based products, enabling efficient development of multiple product variants.

Based on the successful product portfolio of RZ/A3UL. Renesas has designed an HMI solution, the "RTOS-based RZ/A3UL HMI SMARC SOM". The RZ/A3UL and other compatible devices from the product portfolio of Renesas and its partners are used. This successful product portfolio integrates the DA9062 power management IC, the 5P35023 programmable clock generator, the AT25QL128A flash IC, and the SLG46538 GreenPAK for peripheral functions such as system reset as an industry-standard SMARC 2.1 form factor module. Can be used to evaluate the RZ/A3UL or as a reference design to help reduce development time. Renesas has now launched more than 300 "Success Product Portfolios" based on various products in its product lineup.